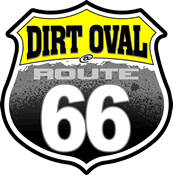 Like the hot rod flames down the side of his racecar, Bobby Pierce has been on fire this week.

The three-time DIRTcar Summer Nationals champion bagged his third consecutive Feature win Friday night at The Dirt Oval at Route 66 in dominating fashion once again, leading all 30 laps to collect the $10,000 check and his fifth Hell Tour Feature win in the first 10 races.

Pierce started on the pole and received an early challenge for the lead from Frank Heckenast Jr, who got a big run out of Turn 2 and slipped underneath Pierce going down the backstretch. But Pierce got him back quickly with a crossover move to the inside and led the first lap.

Heckenast was not going away easy, though. The two engaged in a side-by-side battle for the lead over the first three laps around the ultra-fast three-eighths mile, but Pierce soon got the upper hand and began to open a small gap.

“To beat Frankie [Heckenast] on that start of that race was key,” Pierce said. “When I got by him after the first couple of laps battling with him, from there I just had to hang on.”

Heckenast was actually keeping pace with Pierce through the first half of the race. But then, the leader stepped on it. As he approached lapped traffic, Pierce began to widen the gap even more. He quickly began moving through slower cars while Heckenast lost him as the laps clicked off.

“It was pretty sketchy there for a little bit. Right before that caution came out, there were some guys I was lapping three times, some were two, some were the first time,” Pierce said.

One final opportunity came knocking for Heckenast when the caution flew with four-to-go. Pierce’s near five-second lead had been erased and Heckenast lined-up right on the #32’s rear bumper for the restart.

They hit the gas out of Turn 4 and Pierce took off, leaving the #99JR and the rest of the field in his dust as he sailed across the finish line to collect his 32nd career Summer Nationals victory.

The Summer Nationals action continues Saturday night, July 3, at Fayette County Speedway, where the Late Models will battle it out for another $10,000 grand prize in race #11 of the 2021 Hell Tour campaign. Catch all the action live on DIRTVision presented by Drydene.